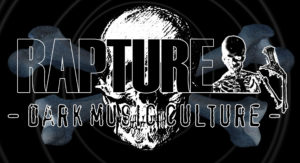 "Upon entering Rapture, you might feel like you've stepped into an unofficial Zombie Squad meeting. But children of the dark side are usually very sweet (we swear) — and at this weekly staple, everything is accepted: alternative, corsets, industrial, combat boots, mope, white face powder, '80s, transvestites, indie rockers, tragic goth dancing... you name it, it's cool. At Rapture, there are no crimes against fashion, only music. Black lipstick? Awesome. Don't know the words to 'Love Will Tear Us Apart'? Blasphemy. Here, you're pretty much guaranteed to hear the Cure, the Smiths, Echo & the Bunnymen and Nine Inch Nails — along with more underground things on the stompy industrial and gothic side as well — courtesy of DJ Skeletal and guests. Warms your little gray heart, doesn't it?"
~ Jaime Lees, The Riverfront Times
March 21, 2007

Dark and Ambient. Rock and Electronic. Old and New. 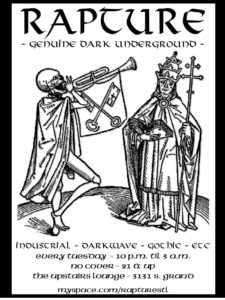 What began as a weekly showcase of local darkwave, industrial, and electro DJS at the cozy confines of the Upstairs Lounge is constantly evolving, and currently has its home at the CRACK FOX.

DJ Skeletal hosts the night along with a rotating roster of St. Louis' best DJs playing on the bleeding edge of dark!